It is the most ancient place of existing historic interests with rich Pinghu culture here, covering an area of 16 mu, located in the Big Island of East Lake, commonly known as Big Lake Pier, which used to be East Lake Park. Chen Yiqian, the magistrate of Pinghu county in the 37th year of Ming Jiajing Dynasty, used the silt debris getting from dredging rivers to fill the lake, which led to the birth of an island, and he named it Big Island. In October of that year, Chen yiqian invited people to ascend the island to take some pleasure, seeing the water flowing in a tortuous path, like nine Chinese dragons wriggling around, while the Big Island like a bead laying on a flat mirror, left corresponding verse. That is why this place was named Nine Dragons Playing Bead. In the 17th year of the Republic of China, one area of Big island was used for Zhongshan Wood, where the Monument of Zhongshan Wood was built. During the Anti-Japanese War, Playing Bead Tower was destroyed, and After liberation, Big Island became People Park, afterwards, renamed to East Lake Park. In 2004, Lishutong Memorial Hall, Lishutong Bronze Statue were built in Big Island. Now the main scenic spots of this area are: Lishutong Memorial Hall, Playing Bead Pavilion, Monument Of Zhongshan Wood, Lishutong Bronze Statue, etc.. 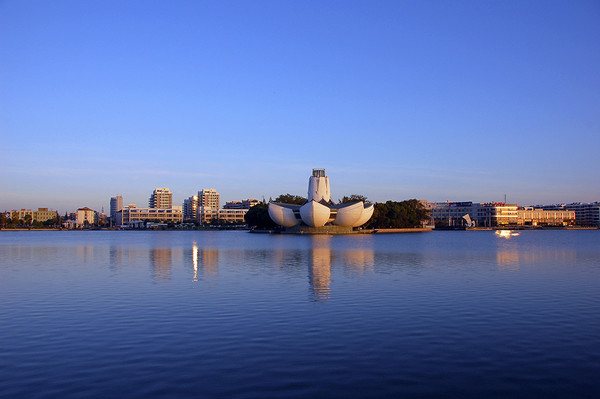